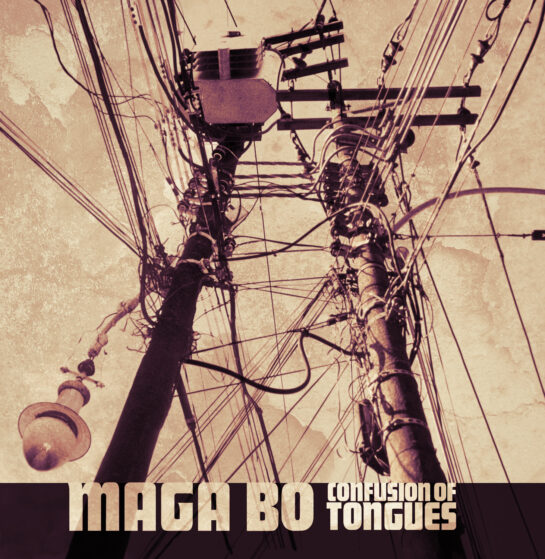 Kaxambu Records · Maga Bo presents Confusion of Tongues
I’ll just go through the tracklist and put some notes in about the tracks in red. Lemme kknow if you want more or different or what……

story of getting into hip hop
21 SWORD FIGHT
22 Maga Bo POEMA SEM SAL feat. Kalaf [Dubplate] www.enchufada.com
Kalaf is Angolan and has lived in Portugal long enough to be considered portuguese (or so he says). This track is about missed connections – arriving too early or too late. Trying to connect with that someone special. Trying to relate on an honest and real level. The track itself is made up of sound fx sampled from sci fi movies. lots of movement sounds – vehicles cruising around accelerating, stopping etc.
23 Timeblind PWANA Most Eye, The Rastabomba Remixes [Orthlorng Musork]
www.crucial-systems.com
wiggly whacky sounds of super collider and the prophetic words of who is that guy anyway? seems pretty appopriate after Kalaf – to the most eye, it’s just a blink of an eye…
24 Pitcho BOUCAN (Dr. Das Bhajni Ragga Remix) [Dubplate]
www.pitcho.com www.myspace.com/drdas
no idea what the lyrics are about. rapper is Pitcho from Brussels. Dr. Das (ex-bass player from Asian Dub Foundation) produced the track. Dub is definitely moving into the digital realm here. made entirely in Live with hacked FX.
25 Maga Bo vs. Spectre CHILL SPOT [Dubplate] www.wordsound.com
Maga bo and Skiz smoking fat ones in Rio. the never finished track….
26 Burhan Öçal and The Trakya All Stars MELIKE feat. Smadj Kırklareli Il Sınırı
[Doublemoon] www.doublemoon.com.tr
cool turkish percussion digitized and filtered
27 Zuco 103 BRAZILECTRO (Amazonia Mix by DJ Git Hyper and Schmid) The Other Side
of Outro Lado [Ziriguiboom/Crammed Discs] www.ziriguiboom.com www.crammed.be
braziian/dutch group and the dirtiest they get. berimbau and distortion and a big fat surdo
28 Tahir GET LIVE Homecoming [Raptivism] www.raptivism.com
sometime producer of Dead Prez from his solo record. very fast hip hop and lyrics about nothing and everything telling you to wake up and get live…..
29 Malorix BELSALAMA [Dubplate] www.malorix.nl
if bollywood can meet breakcore, so can post milenium moroccan rai. Malorix is from rotterdam and a very nice man.
30 André Abujamra/Xis NOÍS EH SAMPLI O Infi nito de Pé [Spin Music]
www.abujamra.com www.spinmusic.com.br
André is a producer/.musician/artist/actor and probably lots of other things. he lives and works in sao paulo. One of the few brazilian producers who is looking to sample indian music and oher musics which are deemed “exotic” from a brazilian perspective. he mixes up a LOT of different stuff and makes it seem totally normal. this groove is distinctly brazilian, yet its got some public enemy in there, and some bollywood and of course, Xis, rapping on top of it saying that we are samples of god.
31 TASSA RIDDIM
still have no clue where this came from or who did it. the internet has been no help. But, funny how it fits almost exactly with Nois eh sampli and with anvil FX right after….
32 Anvil FX POMBOS E FORMIGAS Miolo [YB Music] www.ybmusic.com.br
Paulo Beto (Anvil FX) is a Sao Paulo based producer who has a talent working with noise. This tracks is called Pombos e Formigas or Pigeons and Ants. It sounds something like that…
33 Maga Bo SOLTO RIDDIM [Dubplate]
yep.
34 Sonar Calibrado OS ASSASSINOS feat. Mr. Catra [Dubplate]
Mr. Catra talking about the Assasins – the americans and how they are going around exploiting everythig they can get their hands on. Viva Bin Laden and the palestinian people. baile funk meets egyptian orchestras and an anti-bush demonstration. Mr. Catra is one of the main guys from Funk Proibido. A former, drug trafficer, now he is Mr. Catra the faithful. – Mr. Catra o Fiel. it’s even tatooed on his arm. He still smoke=s enormous spliffs.
35 Sonar Calibrado DANCE OF THE GARBAGEMAN [Dubplate]
staying with the brazilian arabic theme…..samba in some freak show on the djem al fna
36 AudioFile Collective NAMASKAR Do Not Spit Here And There [PostWorld Industries]
www.postworldindustries.com
arrival in chennai, india. very hot outside.
Bonus tracks from forthcoming 12’s on Soot Records
37 Maga Bo FIRE feat. Xuman
burn all the politicians. ragga meets mbalax meets conscious poitical lyrics.
38 Maga Bo NAKHIL (Nettle Remix)
geez….these nettle guys just keep turning up in the strangest of places….;-)