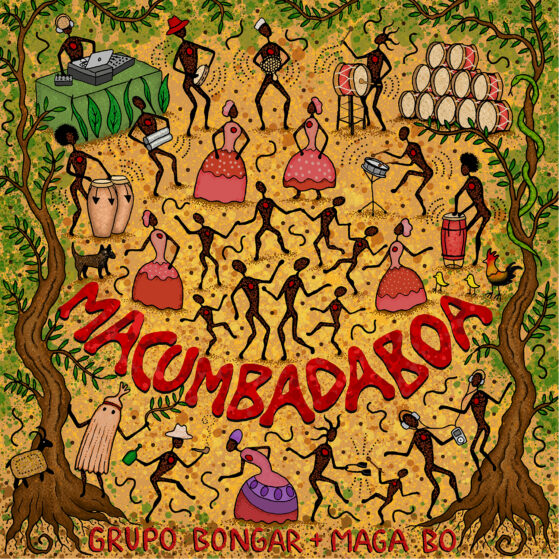 “Macumbadaboa” unites the ancestral sounds of Grupo Bongar from Pernambuco, Brazil with the electronic and dub elements of Maga Bo, the American/Brazilian DJ/producer based in Rio de Janeiro.  The project includes the participation of various well known Pernambuco artists – Isaar, Cláudio Rabeca, Lia de Itamaracá e as Filhas do Baracho, Lu do Coco do Pneu, members from the Xambá terreiro, children from the local community as well as the Malian kora player Adama Keita.  The album explores many northeastern Brazilian rhythms such as coco, afoxé and maculelê as well as subtle elements of electronic and dub music.

The songs were recorded in an improvised studio set up by Maga Bo in the Memorial Severina Paraíso da Silva – Mãe Biu, in the terreiro of Xambá in Olinda.  The intention was to bring Grupo Bongar into a familiar atmosphere where Guitinho could compose music and lyrics on the spot, inspired by the history of the Xambá community which was represented by all of the photos, antiques and relics that surrounded them in the Memorial.

“The lyrics emerged from observing the pieces that make up the Memorial.  The old photos, the utensiles used in the terreiro in the time of Mãe Biu, the old percussion instruments, the maps of Nigeria and Cameroon (where the Xambá folk originated) and the articles of clothing from that time.  Finally, everything that reminds us of our history and the history of our people,” explains Guitinho.  “The repertoire of this album brings traditional songs for the orixás and the entitiies of Jurema.  The original lyrics emerged in the moment, through my observation of the pieces in the Memorial, during the recording.” – Marileide Alves