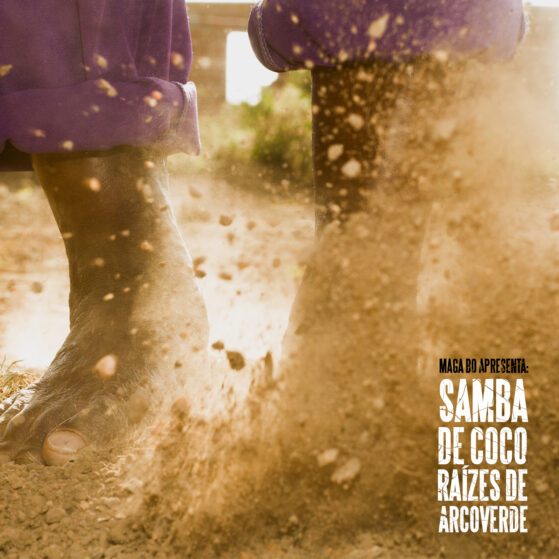 This Kaxambu Records release is from one of the oldest running coco groups in Brazil, Samba de Coco Raízes de Arcoverde. Building on decades of tradition, for this release they have taken a new path working with producer Maga Bo. The results respect and preserve the original afro-brazilian rhythmic structure, while simultaneously introducing a new electronic pallette to their work. Think folkloric, afro-brazilian vibes produced and mixed for big sound systems!

Based in Arcoverde in the semi-arid desert interior of Pernambuco, Samba de Coco Raízes de Arcoverde is a poetic portrait of regional northeastern Brazilian culture. Formed in 1992 by Lula Calixto and the Lopes sisters, it was in 1996 when they managed to break out of the small town boundaries of Arcoverde and perform in other parts of Brasil as well as in Belgium, France and Italy.

A very special ingredient of Samba de Coco Raízes de Arcoverde comes from what they call the coco trupé, which consists of a rapid and strong dance step performed with wooden shoes on a wooden platform (fitted with piezo microphones) which adds a very loud and distinctive percussive element to their sound. Xaxado and samba de roda are 2 other regional manifestations present in the music and dance of the group. In addition to the percussive dance steps and strident vocal harmonies, the traditional instruments present in the group are triangle, surdo and pandeiro. The simple and positive messages of the lyrics complement the frenetic coco rhythms.

Maga Bo became aware of Samba de Coco Raízes de Arcoverde after receiving a a track entitled “Afro-Brazilian awesomeness track 7” in an MP3 swap with fellow djs. It was, indeed, afro-brazilian awesomeness and he began including the track in his sets, mixing and fusing it with dembow riddims which eventually evolved into a full blown remix. The added low end support and international dancehall signifiers made it an immediate hit with global bass and Brazilian djs. When asked to make a mixtape for Nike/Fader for the 2010 World Cup in South Africa, he sought out the group for permission to release the track. The group ended up loving the remix – it was one of the only remixes that they had ever heard that brough a new sonic palette to the mix while still respecting and retaining the original rhythmic structure. Finally, in 2012, a booking at Rec-Beat in Recife brought Maga Bo to Pernambuco where he was finally able to meet the group in person. They agreed to try things out and record a few songs as an experiment. This eventually turned into many trips to Arcoverde and a full album.

On this album, Maga Bo pushed them outside of their comfort zone to bring in new instruments, arrangements and sounds. After noticing that some of the group members also played with a local maracatu group, he suggested that they bring some elements of maracatu to the album. Initially met with skepticism and hesitation, eventually, the group warmed up to the idea and as the production of the album progressed, became more and more open to experimentation and innovation – the first time alfaias, caixas, timbaus, electronic dub fx and heavy sub bass have been included in their sound!

Recorded on a non-existent budget with a backpack worth of gear in an improvised studio over the course of several sessions in several years, this is an independent, guerilla project fueled and financed by air miles, the hospitality of others and the shear desire to see this project to fruition.