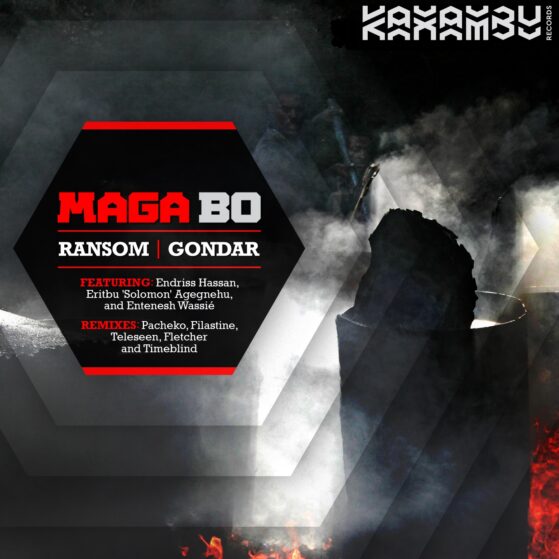 Originally released on Senseless Records, this EP mixes cutting edge bass music with traditional Ethiopian instruments and folklore. Combined with the artwork, a ‘making of’ video and backed by a truly international set of remixes, it is a project that has been a year in the making. The man responsible is international bass nomad Maga Bo, a producer and DJ who literally embodies the global spirit of Senseless as a label. You might know him from an extensive discography including is work with the Dutty Artz collective in NYC (DJ Rupture/Matt Shadetek/Uproot Andy etc), or on labels like Shockout, Tru Thoughts, African Dope or Soot Records. For those unfamiliar with his work he lives in Rio de Janeiro, Brazil, a place where he draws plenty of inspiration from, musical and otherwise, as he explains,

“I’m an immigrant to Brazil, but this has been a very difficult and stressful journey and has really opened my eyes to the experiences of immigrants around the world. I am a migrant musician, as most musicians are, historically, to some degree. Migration and immigration are powerful forces influencing and affecting culture and art. The music that I compose, produce, play and research is a product of migration – my own journeys and the journeys of others.”
That very much sums up Bo’s existence and why we’re so excited to be working with him: a relentless thirst for travel, discovery and collaboration driven by music. This EP came about from a trip to Ethiopia where he met Indriss Hassan who plays the distinctive single-stringed masinqo on title track Ransom. The track was inspired by the infamous hyenas which are fed raw meat outside the gates of Harar, birthplace of Ras Tafari. As Bo explains,

“The way they way move is unlike any animal I’ve ever seen: very powerful. It was their particular way of moving – with caution, but also with desire (to feed) and power – that inspired this track.”

Ransom evolves out of a haze of field recordings driven forward by handclaps with the distinctive masinqo loop rising up out of the atmosphere before a deep sub bass rolls in to underpin it. It’s at once hypnotic and psychedelic, evoking the intensity and energy of a vibrant city like Addis Ababa after dark. The other original track, Gondar, is a traditional Azmari song from Ethiopia, rewired with a dancehall-like riddim and elastic synth bass and more masinqo, this time played by Eritbu “Solomon” Agegnehu.

The remixes come from a truly international line-up all hand picked by Maga Bo himself. First up with a dancehall/dubstep hybrid is the legendary Timeblind of NYC via Berlin, whose varied career has seen everything from techno releases on Hawtin’s Plus-8 to digital dancehall on Kid606’s Shockout. Teleseen (Percepts Recordings), another NYC native atomises the parts and reassembles them in a gloriously schizophrenic electro/acoustic showdown. South Africa’s Fletcher (African Dope) takes the track in a dub direction adding space and FX to the mix. Filastine (Soot/Jarring Effect/Uberlingua/PWI), from Barcelona, comes through with a time-bending groove and ratty, resonant subbass. Last up, Senseless family Pacheko from Venezuela offers up a dub orientated bass-weight monster aimed at deeper dancefloors, something a little different from his recent 4×4 work.

Finally, a special mention for the artwork, a collaboration between local photographer Michael Tsegaye and Venezuelan designer Mad Kick, part of the Abstractor collective with Pacheko. A video clip shot by Maga Bo during the recording of “Gondar” completes the picture.