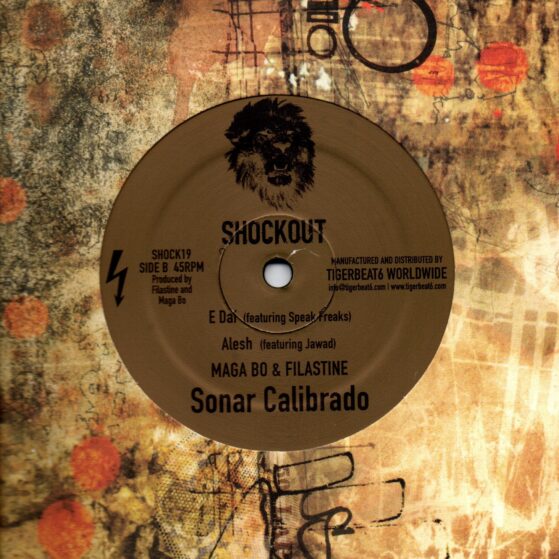 by Sonar Calibrado is Filastine and Maga Bo

Originally released on vinyl back in 2008 on Shockout Records, this quickly sold out and is only now back online and available again via Kaxambu Records:

Filastine returns to Shockout in this collaboration with partner and fellow nomad Maga Bo. Together they are Sonar Calibrado. Meeting in different countries with their mobile production studios the duo built this four song EP, a collection of tracks that are not only all bangers on the dancefloor, but have a density and detail that takes them well beyond that. The three tracks at ragga tempo nearly constitute a genre of their own, defined by syncopated percussion, sub-bass, & distorted melodies, and featuring the filthiest rappers from Brazil and Morocco: Speed Freaks, Mario Z, & Jawad.  Os Asassinos jumps tempo to Carioca funk and features one of the genre’s most infamous gangsters, Mr Catra, while steering well clear of the cliches with it’s chopped up arabic strings and gunshot batucada.

Sonar Calibrado gets busy whenever these two cross paths… Amsterdam, Tangier, NYC, working by day and throwing guerilla street parties by night; during carnival in Rio with pirated electricity, or from a mobile car sound system in the States. This was recorded on rooftops in Rio and Barcelona, unheated squats in Amsterdam, a hotel room in Tangier.